FROM YOUR HIGHLAND CORRESPONDENT This will be my last post from the Highlands in this election. It’s been a strange one. Nothing I think is quite what it seems. The polls suggest an easy SNP win but there is a nervousness about the SNP campaign. It is evidenced by the bitterness amongst their leader andContinue reading "FROM YOUR HIGHLAND CORRESPONDENT"

This will be my last post from the Highlands in this election. It’s been a strange one. Nothing I think is quite what it seems. The polls suggest an easy SNP win but there is a nervousness about the SNP campaign. It is evidenced by the bitterness amongst their leader and party loyalists towards ALBA. I think this is because Alba’s presence has forced a desperate SNP, anxious to bury Alba at birth, to go completely over the top with promoting the downright lie that somehow Alba, who are only contesting the list vote while urging supporters to vote SNP with their constituency vote, are responsible for the polls moving slightly away from the SNP. I would suggest that their own aggressive monstering of another pro Indy Party is a much more likely cause.

Hopelessly hooked on the both votes SNP lie, insisting this will not result in many hundreds of thousands of wasted votes electing nobody other than more Unionist Msp’s they must be increasingly worried about what happens on the 8th May when the truth is revealed and we will all know EXACTLY how many votes they squandered in their selfish pursuit on maintaining their political monopoly of the Independence message.

In the past that would not have mattered it would have been years to the next election, people would forget what happened. Maybe in the past that might have been true BUT here is the nightmare scenario.

Alba is successful and wins seats across the country. They point out how effective Alba votes were in electing pro Indy MSP’s but also highlight the gift to Unionism the SNP HANDED TO THE UNION by allowing, indeed encouraging, the pointless sacrifice of hundreds of thousands of second list votes even though they knew they would never elect a single pro Indy MSP. It will be quite the job to justify what they did after the count is completed.

I have been receiving a steady flow of messages from people who are still members of the SNP but who have been ignoring the increasing pleas to turn out to deliver leaflets. They tell me it is pretty desperate in many areas. They are managing to put up loads of posters but it is the Royal Mail that are doing the leaflet delivery. How very Tory are they becoming these days? The overdraft must be taking a hammering!

Anyway my final fling in the Highlands brought back happy memories. Having being debarred from Party Politics for fifteen years due to holding my diplomatic post with Estonia it was great to get involved again in the most public fashion. Inverness was the ideal place, we had a great turnout, everyone in great spirits and a very happy positive mood was obvious. Now it’s hard to know what the response was but the number of folk flashing lights, pumping horns, giving us the thumbs up is anything to go by we certainly have support out there and they are confident enough of their vote to be happy to publicly demonstrate that support. I have always regarded that confidence as a good sign. It indicates they don’t think they are lone wolves in the contest.

We are now in the final lap, we must redouble our efforts, we have already achieved a great deal. A new Party, many thousands of new members, the creation and distribution of hundreds of thousands of leaflets, posters distributed, street stands, car cavalcades, new friendships made, new teams formed. It has been an enormous effort but just think how we will all feel if we defy the odds, pull off what the “experts” describe as impossible, confound the BBC ban and the MSM BLACKOUT and return ALBA MSP’s. A friend in the USA reminded me of Nelson Mandela’s words only this morning “ it always seems impossible, until it is done”. The polls are in conflict but I judge that we are above the threshold in many areas and on the margin in the others. That tells me that with a fair wind and our maximum efforts we can break double figures of ALBA MSP’s after the votes are counted on the 8th May. Now that would be a campaign success to dine out on for the rest of my life!

Do your best my friends. Our cause is just. Our message is true. Our country, which we all love will greatly benefit from our success. I know many people found it difficult to join ALBA after years of service campaigning and supporting the SNP. I will finish this article to THANK the stupid, bitter, twisted idiots in the SNP, whose bile and hatred has greatly eased that pain.

Many Alba members left friends behind, we still regard them as friends. It is to them this outpouring of hatred is having an effect. They greatly outnumber the fringe idiots responsible for this bile. There are a great many decent people still in the SNP. Many find it totally unacceptable and are embarrassed about it. It is a shame it has happened but when Nicola acts as she does then there is little hope any serious effort being made to bring it to a halt.

The VAST majority of Yes supporters have no interest in division and discord and I hope after the election it will be possible to restore some respect and harmony. At the moment however it is sadly missing. We have a huge battle to win Scotland’s Independence, it will be an easier task if we can all work together but the last few years have made it impossible for many to stay operating with just the one SNP vehicle. Another has been formed, it seeks to reach the same destination but plans a more focussed, direct route. We hope many will travel with us.

THE TRUE REALITY ABOUT COVID

ARE THE TORIES FACING A DISASTER? 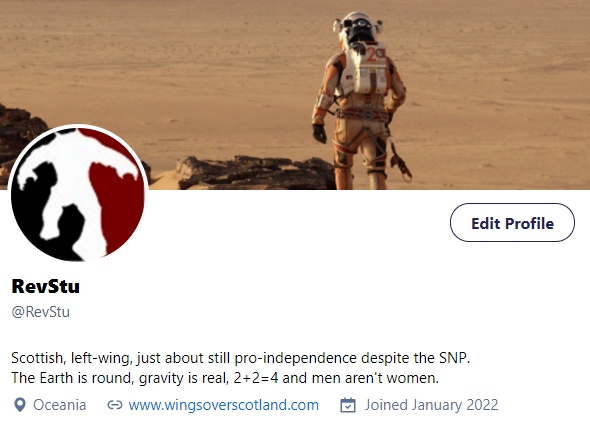