IT’S HAVING AN IMPACT.. A CALL FOR ACTION!

I am being inundated with messages from all over Scotland and abroad in appreciation of the Claim of Right series. Many are astonished they knew nothing of this, they question why they knew nothing and realise their ignorance to it is an intentional tactic, like so much else, of the coloniser. They further question whyContinue reading "IT’S HAVING AN IMPACT.. A CALL FOR ACTION!"

I am being inundated with messages from all over Scotland and abroad in appreciation of the Claim of Right series. Many are astonished they knew nothing of this, they question why they knew nothing and realise their ignorance to it is an intentional tactic, like so much else, of the coloniser. They further question why the YES LEADERSHIP have not made more of this and ask the question, will they do so now?

I print below a typical message I have received. This is from Iain Bruce, who hails from Nairn. Iain suggests Arbroath should be the scene where the Claim of Right reclaims a new significance in the political life of Scotland.

I currently find myself wandering aimlessly in an increasingly barren political landscape since the SNP landslide victory of 2015 in search of leaders that I can rally around in one last push for Indy before the grim reaper has his way with me.
Having read Scotland’s Claim of Right Part 1, the blinding flash of damascene light shows me I shouldn’t really be looking for a leader, I need to look for a place.
And there’s no better place than Arbroath particularly on April 2 2022.
Even if Empress Nicola fulfils her promise to lodge a Section 30 request any time soon, our English cousins aren’t daft and an 80-seat majority means they will cock their collective snoots at the protestation of denial of democracy which will follow it’s rejection.
The somnambulant and deaf SNP management are giving a good impression of two of the famous three wise monkeys allowing them to gloss over the notion that any Section 30 agreement will come attached with conditions that no self-respecting SNP government could ever accept.
On July 4, 2018, the SNP’s Westminster clan chose Independence Day, Starts and Stripes version, for the Commons debate on the latest incarnation of Scotland’s Claim of Right.
Yet a mere three months later in October 2018, now there’s a coincidence, the Constitution Reform Group with the Privy Councillor and token jock, Menzies Campbell, sponsored the Act of Union Bill in the House of Lords, in a Parliamentary system which now has the ‘back-up’ of Henry VIII powers.
None other than Mr Pete Wishart was in his role as Shadow Leader of the House at the time of the July debate, interestingly he isn’t recorded in Hansard as having contributed to the debate but presumably he knows of the outcome…”That this House endorses the principles of the Claim of Right for Scotland, agreed by the Scottish Constitutional Convention in 1989 and by the Scottish in 2012, and therefore acknowledges the sovereign right of the Scottish people to determine the form of government best suited to their needs.”

If we are sovereign then we need to act as if we are sovereign and willingly accept the advice of the UK Government’s terms for the “liberation” of Kosovo when they submitted the argument that “the agreement of the state being seceded from was not necessary for Independence” and confirmed by the judgement of the International Court of Justice (ICJ)1
Some argue that international recognition is a prerequisite to achieving independence as that achieved by the Baltic states following the fall of the Soviet regime and whilst I’m confident we could readily achieve that recognition, we are an ancient nation and gave the world the Declaration of Arbroath. And the idea of the sovereignty of the people.
What we don’t need is the continuing national humiliation by repeated rejection of Section 30 requests.
It is clear to us on the Yes side of the discussion that the constituent parts of the Indy cause need to collaborate in our joint cause but equally the SNP need to disabuse themselves that they know what’s best for the rest of us.
We desperately need a Convention of the Estates to thwart the myopia of the SNP’s Section 30 trance, so let’s lay those foundations at the 702nd anniversary of the signing of the Treaty of Arbroath. Let’s stop messing about, let this be the Peoples’ chosen route to an Independent Scotland.
Iain Bruce Nairn

THE IDEA BEHIND THIS.

THAT SPEECH IN FULL. 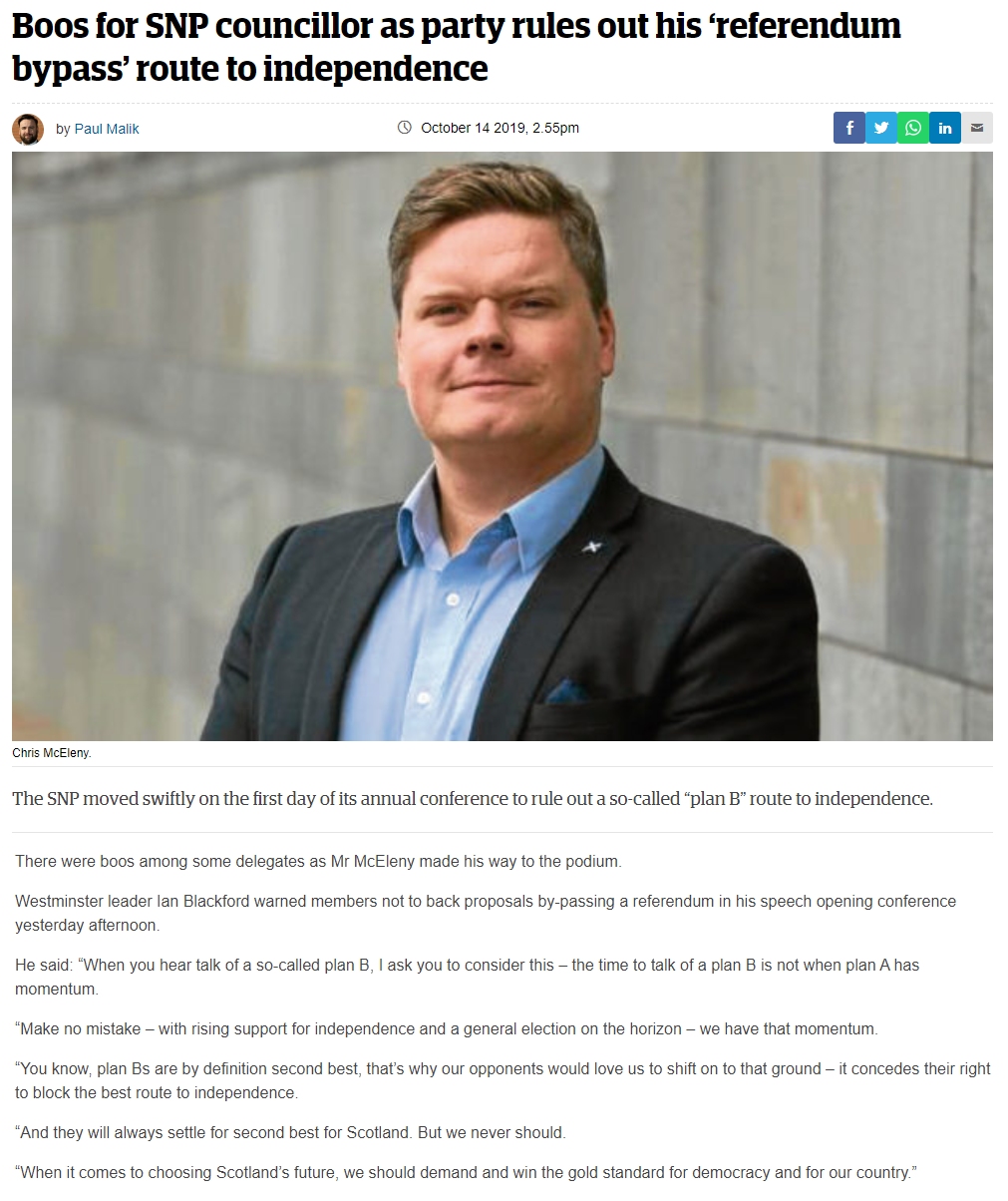